Elliptic curves are certain types of nonsingular plane cubic curves, e.g., y^2 = x^3 + ax +b, which are central to both number theory and cryptography (e.g., they are used to compute the hash in bitcoin). 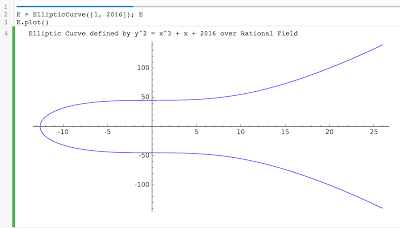 If you want to do a wide range of explicit computations with elliptic curves, for research purposes, you will very likely use SageMath or Magma. If you're really serious, you'll use both.

Both Sage and Magma are far ahead of all other software (e.g., Mathematica, Maple and Matlab) for elliptic curves.

When I started contributing to Magma in 1999, I remember that Magma was way, way behind Pari. I remember having lunch with John Cannon (founder of Magma), and telling him I would no longer have to use Pari if only Magma would have dramatically faster code for computing point counts on elliptic curves.

A few years later, John wisely hired Mark Watkins to work fulltime on Magma, and Mark has been working there for over a decade. Mark is definitely one of the top people in the world at implementing (and using) computational number theory algorithms, and he's ensured that Magma can do a lot. Some of that "do a lot" means catching up with (and surpassing!) what was in Pari and Sage for a long time (e.g., point counting, p-adic L-functions, etc.)

However, in addition, many people have visited Sydney and added extremely deep functionality for doing higher descents to Magma, which is not available in any open source software. Search for Magma in this paper to see how, even today, there seems to be no open source way to compute the rank of the curve y2 = x3 + 169304x + 25788938.  (The rank is 0.)

There are several elliptic curves algorithms available only in Magma (e.g., higher descents) ... and some available only in Sage (L-function rank bounds, some overconvergent modular symbols, zeros of L-functions, images of Galois representations). I could be wrong about functionality not being in Magma, since almost anything can get implemented in a year...

The code bases are almost completely separate, which is a very good thing. Any time something gets implemented in one, it gets (or should get) tested via a big run on elliptic curves up to some bound in the other. This sometimes results in bugs being found. I remember refereeing the "integral points" code in Sage by running it against all curves up to some bound and comparing to what Magma output, and getting many discrepancies, which showed that there were bugs in both Sage and Magma.
Thus we would be way better off if Sage could do everything Magma does (and vice versa).