I've added task list functionality to SageMathCloud (SMC), so you can keep track of a list of things to do related to a project, paper, etc. Task lists are saved as files on the filesystem, so they can be backed up in the usual way, automatically generated, etc. I doubt anybody is going to use SMC just for the tasks lists, but for people already using SMC in order to use Sage, write LaTeX documents, use IPython notebooks, etc., having a convenient integrated task list should come in handy.
To create a task list, in a project, click "+New", name the task list, then click the "Task List" button.  Here's what a task list looks like: 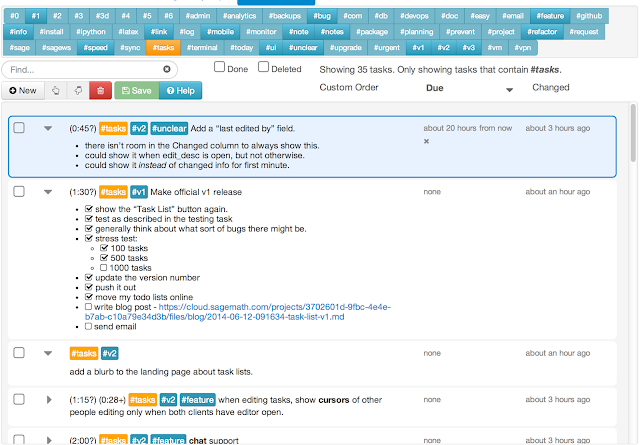 I used the task list quite a bit when implementing the task list, and significantly modified the interface many, many times. I also tried out numerous other todo list programs for inspiration. I eventually settled on the following key design choices, some of which are different than anything I've seen. In particular, the design targets highly technical users, which is not something I saw with any other todo list programs I tried.
Of course, I still have an enormous list of functionality I would like to add, but that will have to wait. For example, I need to enable a chat associated to each task list, like the chats associated to Sage worksheets and other files. I also want to make it so one can select a range of tasks and copy them, move them, paste them into another list, etc. It would also be nice to be able to export task lists to HTML, PDF, etc., which should be fairly easy using pandoc.  I'm also considering making a note list, which is like a task list but without the due date or "done" box.  Because of all the infrastructure already there, it would be easy to add code evaluation functionality, thus creating something like worksheets, but from a different point of view (with maybe hashtags determining the Python process).

One interesting thing I noticed when implementing task lists is that there are many similarities with the original sagenb.org design (and also IPython notebook), in which a worksheet is a list of cells that get evaluated, can be manually reordered, etc. Similarly, a task list is a list of "cells" that you edit, manually reorder, etc. With sagenb we had longstanding issues involving the order of each cell and assigning an integer numerical id (0, 1, 2, ...) to the cells, which resulted in things like cells seemingly getting randomly reordered, etc. Also, having multiple simultaneous viewers with automatic synchronization is very difficult with that model. For task lists, I've introduced some new models to address these issues.

A natural way to store a task list is in a database, and I initially spent some time coming up with a good database schema and implementing basic lists using Cassandra for the backend. However, I couldn't pursue this approach further, since I was concerned about how to implement realtime synchronization, and also about the lack of easily backing up complete task lists via snapshots, in git, etc. So instead I created an "object database" API built on top of a file that is synchronized across clients (and the server) using differential synchronization. The underlying file format for the database is straightforward -- there is one line in JSON format for each record in the database. When objects are changed, the file is suitably modified, synchronized to other clients, and events are triggered.

Since differential synchronization has no trouble with files that have "a few thousand lines", this approach works well for our purposes (since personal or shared todo lists are typically fairly short). Also, having one line per record is at least more git friendly than something like a sqlite database. I'm considering rewriting my implementation of IPython notebook sync on top of this abstraction.
Since I view the task list as a database, each task has a globally unique uuid. Also, instead of viewing the task order as being defined by an integer 0,1,2,3, which leads to all manner of bugs and programming misery, race conditions, etc., instead we view the order as being determined by floating point positions. So to insert a task between tasks with positions 1 and 2, we just give the task position 1.5.
Posted by William Stein at 12:31 PM

The Official Go Tutorial as a (41-page) SageMathCloud worksheet 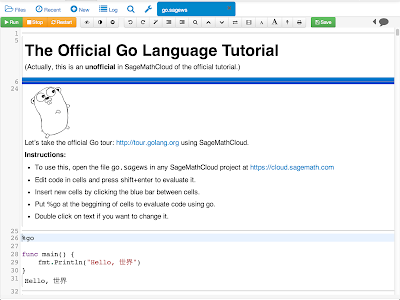 Do you like using interactive SageMathCloud worksheets and want to learn the basics of the Go Programming language? I've added a %go magic to SMC worksheets, and translated the official Go tutorial into a single long worksheet.
You can also directly browse a PDF of the worksheet here: https://github.com/sagemath/cloud-examples/blob/master/go/go.pdf?raw=true

I've made the following updates to https://cloud.sagemath.com:


User interface changes (refresh your browser to get)

Upgrade from Codemirror 3.20 to CodeMirror version 4.2, which is much better, faster, and has new features:

Here's a 2-minute screencast that illustrates some of the above UI features: http://youtu.be/ykb12MGHOuk


Task Lists: There is now a preliminary task list implementation. To use it, make a file that ends in .tasks.