Many people try SageMathCloud, but only a small percentage stick around.  I definitely don't know why. Recent SageMathCloud rates are below 4%:

Question: Are the people who try SMC discouraged by performance issues?

I think it's unlikely many users are leaving due to hitting noticeable performance issues.  I think I would know, since there's a huge bold messages all over the site that say "Email help@sagemath.com: in case of problems, do not hesitate to immediately email us. We want to know if anything is broken!"    In the past when there have been performance or availability issues -- which of course do happen sometimes due to bugs or whatever -- I quickly get a lot of emails.  I haven't got anything that mentioned performance recently.  And usage of SMC is at an all time high: in the last day there were 676 projects created and 3500 projects modified -- which is significantly higher than ever before since the site started.  It's also about 2.2x what we had exactly a year ago.


Is it the user interface?

Question: Is the SMC user interface highly discouraging and difficult to use?

My current best guess is that the main reason for attrition of our users is that they do not understand how to actually use SageMathCloud (SMC), and the interface doesn't help at all.   I think a large number of users get massively confused and lost when trying to use SMC.    It's pretty obvious this happens if you just watch what they do...    In order to have a foundation on which to fix that, the plan I came up with in May was to at least fix the frontend implementation so that it would be  much easier to do development with -- by switching from a confusing  mess of jQuery soup, e.g., 2012-style single page app development -- to Facebook's new React.js approach.  This is basically half done and deployed, and I'm going to work very hard for a while to finish it.   Once it's done, it's going to be much easier to improve the UI to  make it more user friendly.

Is it the open source software?

Fixing the UI probably won't help so much with improving the underlying open source mathematical software to be friendly though.    This is a massive, deep, and very difficult problem, and might be why growth of Sage stopped in 2011: 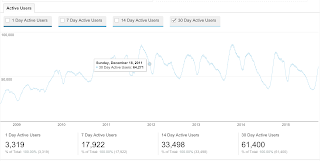 SageMath (and maybe Numpy/Scipy/IPython/etc.) are not as user friendly as Mathematica/Matlab.   I think they could be even more user friendly, but it's highly unlikely as long as the developers are mostly working on SageMath in their spare time as part of advanced research projects (which have little to do with user friendliness).

Analyzing data about mistakes, frustation, and issues people actually have with  real worksheets and notebooks could also help a lot with directing our  effort in improving Sage/Python/Numpy/etc to be more user friendly.

Question: Are users frustrated by lack of interactive support?

Having integrated high-quality support for users inside SMC, in which we help them write code, answer questions, etc., could help with retention.


Why don't you use SageMathCloud?

I've been watching this  stuff closely for over a decade most waking moments, and everybody likes to complain to me.    Why don't you use SageMathCloud?   Tell me:  wstein@sagemath.com.

Posted by William Stein at 7:52 PM